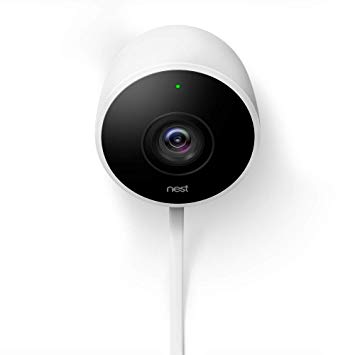 I love tinkering with home automation and security solutions.  The simplicity of turning on a light bulb with a voice command makes me giddy, and I totally geek out over building scripts with more complex interactions between multiple devices.  So, I recently purchased an Outdoor Nest Camera to point at my driveway for monitoring purposes (I’m not paranoid, but my driveway and mailbox are at the back of my house so I would like to see when strangers are there).  This was my first time playing with a Nest Camera device, so I was naturally curious about how it worked.

I am certain Nest (or Google) has done a fantastic job in designing and testing the security of their devices, but I like to see for myself how things work. I want to understand a bit more about what it is doing before attaching it as a permanent member of my home automation family.

My testing was limited to what can be done without damaging the camera, altering the device (I did want to use it after), or breaking the law.  Please look elsewhere if you are expecting a zero-days or DIY hardware hacking instructions. Here were my rules for this “engagement”:

By observing the web traffic and performing port scans across the device, it appears that the device does not accept any kind of input unless it is in setup mode.  So if you are trying to picture the architecture, basically what happens is the camera talks to the cloud and your mobile app talks to the cloud. So something like this:

Information is exchanged on the server (i.e. in the cloud) rather than establishing a direct connection from your application to your camera.  I see this as a good choice for an architecture because it makes the camera, in any normal scenario, inherently resistant to typical probing and fuzzing attacks. Your options are pretty limited when the device doesn’t expose a single port to the network.

The camera was seen making web requests to the following hosts:

I didn’t find any traffic that was super exciting.  It included an access token (good for 30 days) and a cookie, as might be expected, but was otherwise unremarkable.  It should also be noted that the initial call during pairing failed over my Burp proxy. I had to temporarily disable to proxy for that to complete.  I didn’t dig into this further but my guess is that it likely is using some form of certificate pinning.

Additional app features that are good for this device’s security:

1 – The application supports two-step verification.  You have to turn it on, but at least it’s there to make things harder for someone trying to brute-force their way through authentication.

2 – The application supports the concept of family accounts.  You can share Nest devices with other family members without having to share a password. This is a good thing, as traditional web cameras tend to default to a single account, encouraging people to share credentials.

One feature I noticed that is not favorable is the default (On) status of the microphone. My understanding is that in general it is legal to record video but illegal to record conversation without at least one party’s consent. I think those rules are a little different when you step on private property, but still: Google does not know where you are going to mount that camera. I was concerned about whether or not the camera will pick up conversation from people walking by who are not aware of it.  So to test this out, I used the very scientific method of recording myself (yes, talking to myself) at what would be a normal conversational volume at various distances from the device. What I found was that the microphone did not seem to record my voice when I was more than about 12 feet away. So this is less concerning than I thought it might be, but it was still enough of a concern that I turned the microphone off.

From a security perspective, the Nest camera solution seems to be very well thought out and architected to reduce attack surface. Also, the application includes the security features we would expect. The only thing I would caution users about is that the microphone will be on by default, so they should consider turning it off if the camera is positioned near a public area where people might have conversations.

This is the second in a three-part series, Three C-Words of Web Application Security. I wrote a sort of prologue back in April, called A Brief...

For those less versed in web applications and how they’ve evolved, I wrote a sort of prologue to this post back in April 2018, titled A Brief...