Today we’re going to walk through a few WiFi testing examples using Aircrack-ng, which is a suite of wireless network security tools.  It allows us to monitor and export packet data, attack access points and clients, and crack WEP and WPA keys.  I’ve included some links at the bottom if anyone wants to do more research on wireless, RC4, or Aircrack-ng.

In a nutshell, we are going to set up a couple test scenarios and then walk through some different attack methods.  We’ll scan for our wireless access point (AP), setup a traffic capture, generate network traffic, and then step through different methods of gaining the wireless key.  During these examples, keep in mind the complexity of the passphrase being used and the different ways those keys can be discovered.  Also, as a reminder, only test against devices or networks that you own or have express written permission to test.

For these tests, here is my current hardware and setup:

To get started, the first thing we’ll want to do is check the wireless interface and start a quick airodump-ng scan to make certain we can detect our test AP.  For the first test example, I’ll detail the parameters used, but will leave them off for the others.

Originally, I was using a Backtrack 5 instance.  As such, there are a few differences I ran into when trying to use airodump-ng with Kali 2018.2.  Rather than using airmon-ng to start your wireless card in monitor mode, you may need to manually set the interface to monitor mode.  These steps may not be needed with every wireless card or in every configuration, but they worked consistently for me.  I’m including it in case this helps others who have had some difficulty getting airodump-ng to detect access points in later versions of Kali.

For the first example, I’ll generate a random passphrase for my router and use a fragmentation attack to recover the key.

With wlan0 in monitor mode, we can scan through all channels, scan just one channel, or even scan for a specific AP on a single channel.  This is helpful when we just want to see what’s out there but not capture any traffic.  Let’s check to make sure that there aren’t any DHCP processes that may interfere with testing.  This should be done before each test:

In the first terminal window, we’ll use airodump-ng to get the MAC address of the AP and wireless interface:

So, now we’re ready to start our traffic capture and only target the test device.

It should be noted that a fragmentation attack needs to be done with a MAC that is associated to the AP.  Since no other devices are connected, we’ll use aireplay-ng in a second terminal window to fake-authenticate to the AP.

By now, you should see something similar to this on your first terminal screen:

In a third terminal window, use a fragmentation attack to obtain a .xor file:

Next, use packetforge-ng to create an injectable packet and write the results to a capture file:

Once the packet has been created, we can now inject it into the network to generate our #Data traffic:

This is where things will start to get interesting.  If everything has gone well, then you’ll see hundreds of packets per second being sent.  You’ll also see a significant increase in the #Data packets captured on your first terminal screen.

From here, you simply wait until enough packets have been captured to crack the WEP key:

In the fourth terminal window, attempt to use aircrack-ng when roughly 40k-50k data packets have been captured.  In this case, 50k was enough. 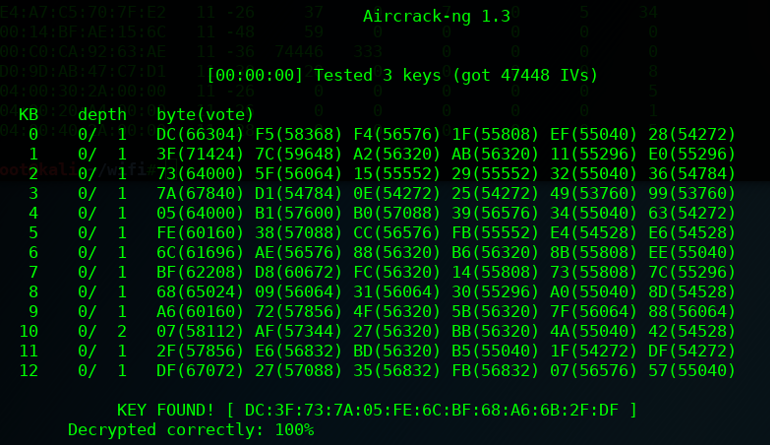 Since there are no other connected devices, we’ll fake-authenticate to the access point again:

Next, we’ll use the Korek Chop Chop method to get the .xor file:

You’ll be looking for a successful .xor file that you can use with packetforge-ng and it’ll look similar to this:

Now that we have the .xor file, let’s use packetforge-ng to create another injection packet for the network.

Then, similar to before, we can replay this packet to generate the data packets we need to crack the WEP key.

With just over 70k #Data packets captured, we’re able to crack the key:

Now, since we’re in Shared Key mode and there are other connected devices, we are going to start with de-authenticating one of them:

Here you want to pay close attention to the keystream.  In the screenshot below, you’ll notice a ‘Broken SKA’ message.  If this happens when trying to de-authenticate, then you will need to stop your airodump-ng capture.  Ideally, you want a clean de-authentication the first time, but there a few options you can try at this point:

Example of a ‘Broken SKA’ message:

Example of a good keystream message:

From here, we’ll change our <MON> MAC back to what it should be, and then use this .xor file to fake-authenticate:

Use the .xor file with packetforge to create the injection packet:

Next, replay the packet back into the network to generate #Data packets: 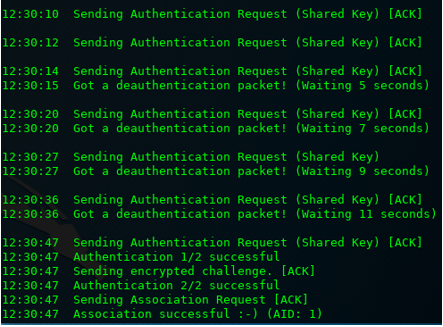 When enough packets have been captured (just over 35k this time), crack the key:

Hopefully, this has been helpful for anyone beginning to have an interest in wireless security.  I also hope it’s been apparent that, regardless of length or complexity, WEP should not be used to secure wireless networks.  WEP provides a small measure of security for network traffic, but as we’ve seen, due to its RC4 encryption any key can easily be broken.

For additional exercises you may want to try different attacks, switch between Auto and Shared Key authentication, test with and without connected devices, or change out of mixed mode.  Tinkering with different configurations will go a long way in increasing your understanding of wireless security.   Here are some links for learning more:

As a security consultant, there are so many scenarios that I run into every day that there is no one tool or script that solves every problem.  The...

The Metasploit Framework is a key resource for security assessors. Whether you’re goal is to become a commercial penetration tester, to demonstrate...