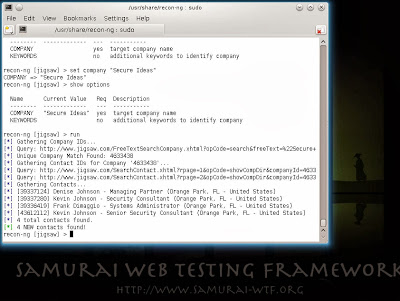 Nathan Sweaney
Nov 19, 2013
Here are some examples of information often found during the reconnaissance phase
All of these used to be very manual processes. In the past, shortcuts such as the Google Hacking Database tried to simplify the process, but it was still very time consuming. Now that’s changed.
Recon-ng is a python-based reconnaissance framework that’s designed to simplify and automate the process of gathering public information. With a structure similar to Metasploit, the tool provides a modular design that makes it easy to get started while allowing advanced users the ability to quickly develop their own functionality. It’s also an open source project, started by Tim “LaNMaSteR53” Tomes. (He is eagerly seeking additional assistance.)
Installing Recon-ng is extremely easy. It’s been tested on OS X and several Ubuntu derivatives, but should also run on most linux distributions once the 3rd party libraries are complied correctly. For this article, we’ll install it on the Samurai Web Testing Framework which is based on Ubuntu.
I’ll be placing the tool in the /usr/share/ directory but you can install it anywhere you’d like. To begin, enter the following command to pull down the latest version from the Git repository.
sudo git clone https://LaNMaSteR53@bitbucket.org/LaNMaSteR53/recon-ng.git
Now it’s as simple as changing into the recon-ng directory and launching the program.
cd recon-ng
./recon-ng.py
(Depending on where you download the tool, you may need to use sudo to launch it.)
The script loads immediately and shows us the recon-ng header and version number (v2.2013.10.30.1535 as of this blog post.) It also offers several different categories of modules to assist in your reconnaissance mission.

At this point we can type ‘help’ to see a list of available commands, or begin by actually loading specific modules. I’m going to start by seeing what I can learn about the Secure Ideas company. One module that might help scrapes the Jigsaw.com website for employees. We can load the module using the following command.

recon-ng > load recon/contacts/gather/http/web/jigsaw
It’s important to note that recon-ng also supports autocomplete just about everywhere you’d expect it. So once I type “recon/contacts/gather/http/” I always forget what comes next. If I type “w” and hit TAB, it’ll autocomplete “web” for me. Then, if I don’t remember the final name of the module, I can hit TAB twice to see all of the modules in this section.
Now that I have my module loaded, I need to find out what data is required to start the search. “Show options” displays each of the parameters for the module, their current values, and whether they are required. For this module, only the company name is required, so I’ll set that and then start the module.
recon-ng > show options
recon-ng > set company “Secure Ideas”
recon-ng > run 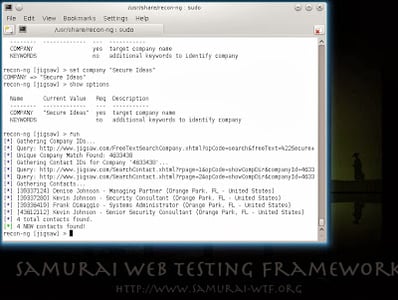 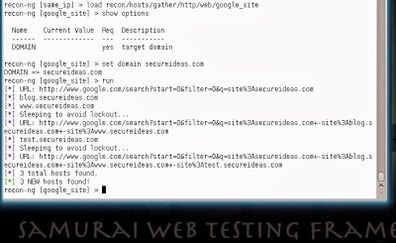 While recon-ng includes a lot of modules that query free sources, it also has a number of modules that require API keys or memberships to access the data. In order to acquire those APIs, the project maintains a list of module and directions here.
For more information about Recon-ng, check out the project page, or watch Tim Tomes’ introductory talk at DerbyCon 2013
Project Page:  https://bitbucket.org/LaNMaSteR53/recon-ng
DerbyCon Presentation:  http://www.irongeek.com/i.php?page=videos/derbycon3/1104-look-ma-no-exploits-the-recon-ng-framework-tim-lanmaster53-tomes

Nathan Sweaney is a Senior Security Consultant for Secure Ideas. If you are in need of a penetration test or other security consulting services you can contact him at nathan@secureideas.com or visit the Secure Ideas – Professionally Evil site for services provided.

Current State of Security in Healthcare

Healthcare organizations are a prime target for many malicious individuals and organizations in the information age. Identity thieves, blackmailers,...

During our penetration tests we often get asked about the amount of information that is leaking out via social networks, web pages and the like.  In...

In this series of the Professionally Evil Toolkit we will be talking about Reconnoiter. Reconnoiter was created by Secure Ideas very own Jason Wood....